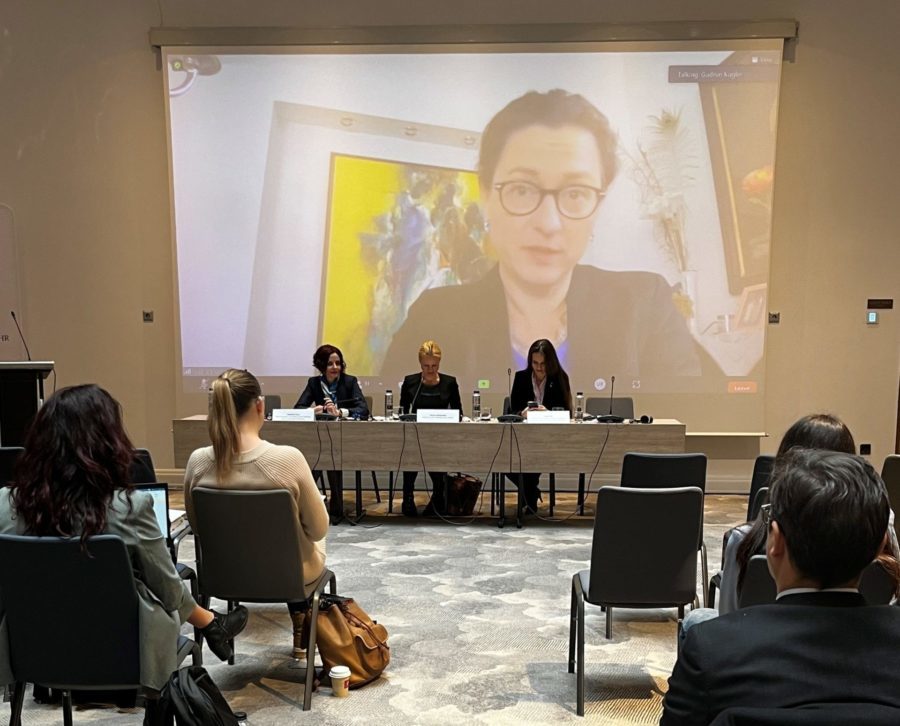 It is a privilege for me to join you online in a such unique platform as it is today – Eastern and Central Europe Launch of the ODIHR’s 2nd edition of the Handbook on National Referral Mechanisms to Protect the Rights of Trafficked Persons, in Bucharest.

The role of national referral mechanisms in combating trafficking in human beings remains more relevant than ever. In the fifteen years since the first edition was published, trafficking in human beings has been the fastest growing and second largest criminal industry in the world. Criminals have adopted ever more sophisticated techniques for exploiting their fellow human beings. New technologies, the Internet and social media have been deployed to groom, recruit and traffic vulnerable women, men and children in a global multi-billion dollar criminal industry. Root causes, including poverty, gender-based violence, armed conflicts, pandemic health issues, climate changes and contributing factors that fuel demand are spread across countries of origin, transit and destination.

As the rapporteur of 2nd committee of the OSCE PA, I would like to remind you of the commitment of the Parliamentary Assembly in Birmingham, in whose Declaration pp 90-93, signed by all parliamentary representatives at OSCE PA, you find key passages regarding human trafficking:

Only, a comprehensive response to addressing this phenomenon will require the combined action of all stakeholders. And here I would like to emphasize: the importance of the effective National Referral Mechanisms in order to better identify, assist and protect victims of human trafficking and to restore not only their rights by ensuring criminal justice and redress but also their lives. After decades of efforts and declarations, the progress made is significant but not sufficient. We have to recognise that is time to act and to put in place: Effective National Referral Mechanisms standardized across all countries and then to extend them to the transnational level.

The updated handbook recognises the new challenges we face in combating human trafficking, but also new developments in our approaches and understanding of how best to identify, protect and support victims, ensure criminal justice and redress and how to prevent them from becoming victims of trafficking in the first place.

Most notably, we expressly recognize that survivors’ and victims’ needs and views need to be at the centre of policy responses. Indeed, this Handbook has been created following in-depth consultations with survivors themselves. I am extremely grateful that this event will emphasize again the vital voice and the important role of survivor leaders in designing a new public policy approach, where their contribution is internationally recognised. Having a dedicated session regarding the survivor leaders’ role shows us that trafficking in human beings persists and no actor can tackle trafficking in human beings alone. We have to act together, systemically, using a multidisciplinary and multi-agency approach.

While the principal responsibility for change lies with national governments, a whole of society approach is needed – the social partners, civil society including faith-based stakeholders, businesses, survivor groups, and an array of other actors have critical roles to play. Social dialogue and mutual partnership provide an essential framework for building lasting, consensus-based solutions to the challenge of trafficking in human beings.

The OSCE participating States recognised their responsibility to combat trafficking in human beings with the 2003 OSCE Action Plan. They reiterated their commitment in 2005 and 2013, as well as through several other Ministerial Council Decisions. NRMs are the institutional tools that help States identify trafficking victims and ensure their protection. This Handbook provides a guidance model that all OSCE participating States can adapt and apply within their own national systems to ensure that their NRMs meet the highest standards in both design and implementation.

Last but not the least, strategies to address demand need to be part and parcel of any action on combatting trafficking in human beings. This event reminds us of the necessity to work together, not only to address the consequences of trafficking in human beings, but to come up with impactful solutions to prevent it and this cannot be accomplished without the inclusion of survivor leaders at the centre of this process.

I sincerely believe that this publication will be a valuable resource for the whole OSCE region to fulfil the commitments to fight human trafficking. Finally, I would like to emphasise that OSCE PA stands ready to support all OSCE participating States in this endeavour.

Thank you very much.